The Great Replacement is very simple. You have one people, and in the space of a generation, you have a different people. Renaud Camus

Great Replacement - The change of people and civilization, via mass migration. Renaud Camus. You Will Not Replace Us! (2018) p.190

The Great Replacement (French: Le grand remplacement) is a term originally coined by a French writer Renaud Camus who first used it to describe the demographic replacement happening in France because of its mass immigration policies and low birth rates among the native French. In his book, he writes:

I have coined the phrase Great Replacement (in French Grand Remplacement) to denote the brutal change of population which has been taking place in France (and in Europe) since the beginning of the last quarter of the last century; and which has been gaining momentum ever since.

The name came to me as I was travelling to write a sort of literary guidebook about the département of Hérault, in Languedoc, Southern France, when I discovered that thousand year-old villages had their population largely transformed, with women wearing the Islamic veil gathering at the 18th-century fountain and other appearing at gothic twin windows. I was accustomed for long to the existence of large modern banlieues almost entirely populated by immigrants, but this was an altogether different experience.

The name I gave it was probably dictated to me by more or less conscious historical memories of the Great Upheaval of the Acadians, in 18th-century Canada. There was nothing strictly deliberate in my choice of words. ... The fact remains that entire streets, districts, towns, regions, not to mention schools, which had had for centuries a given population, suddenly have an entirely different one. The face of the country has been transformed to an unimaginable extent. So has its body, and so has its mind, and soul. 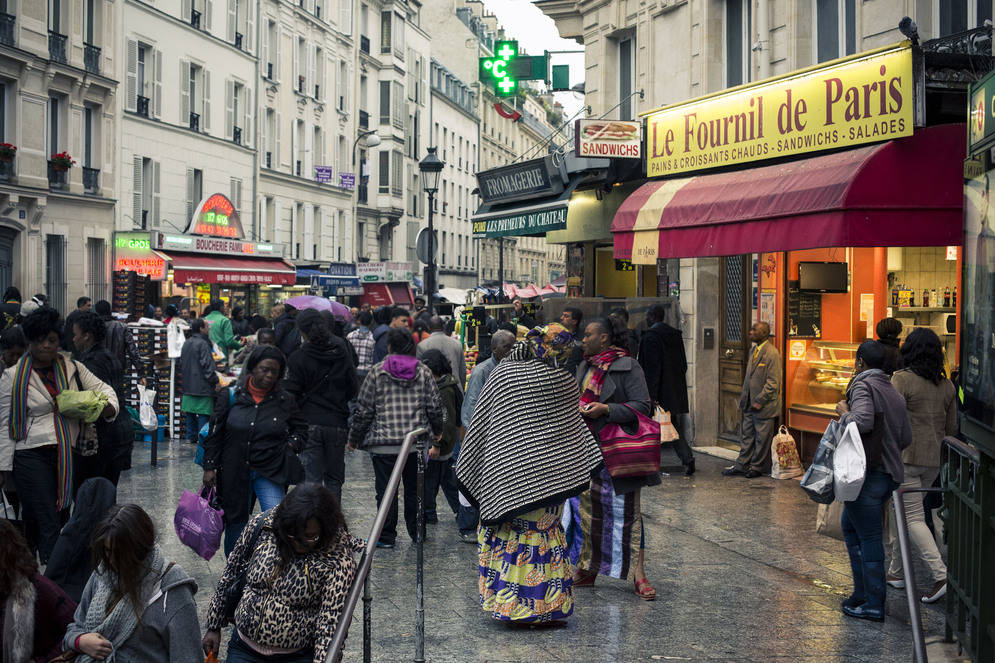 The same phenomena can be observed across all of Europe and abroad in places like Australia and Canada. Today, there is not a single white country in the world with a birth rate above the replacement level. Of all the different races of people on this planet, only the European races are uniquely facing the possibility of extinction in a relatively near future. 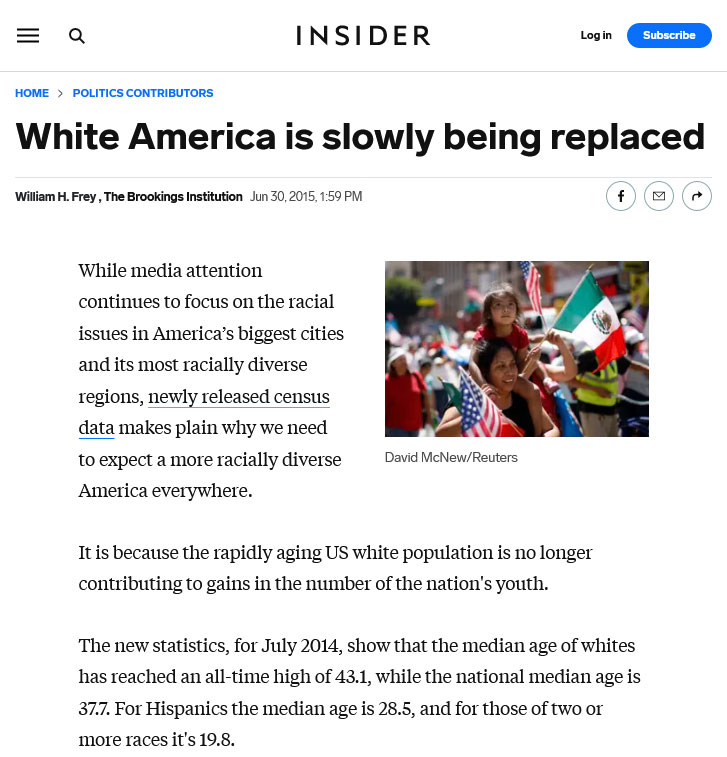 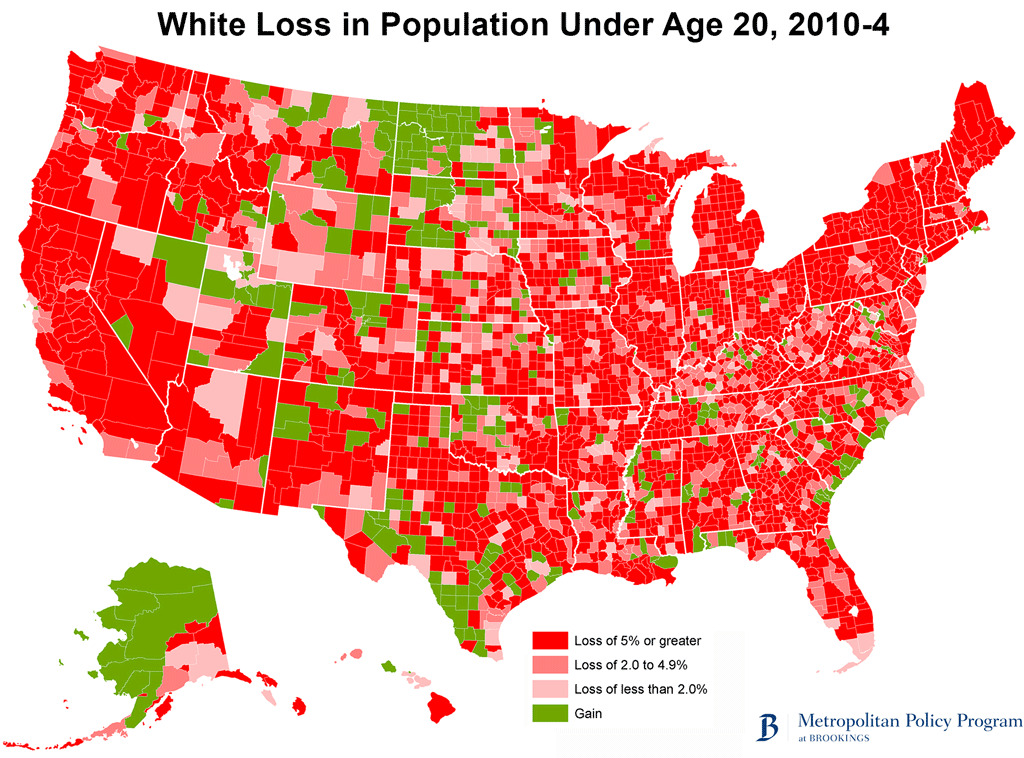 This collapse in birth rates, combined with the radical change in immigration policy implemented in the 1960s, is leading to a dramatic shift in demographics where the native ethnic/racial group becomes outnumbered by new groups in relatively short period of time.

Motivated by economic interests and ethnic activism of other groups, governments justify their replacement migration policy as a way to boost the working-age population in order to collect enough tax revenue to pay for pensions and other old-age benefits.

However, many of those who study population demographics admit that this is not sustainable in the long run due to the simple fact that immigrants themselves eventually get old too. What this means is that the number of immigrants a country needs to import each year has to go up and up even to maintain welfare dependency ratio at a level it exists now.

One report from the United Nations notes:

The number of migrants necessary annually to keep the potential support ratio constant at its 1995 level would be 15 times greater than the net migration level in the 1990s. Towards the end of the period, i.e. by 2040-2050, the net annual number of migrants required by the European Union would be equivalent to half the world's annual population growth.

The Great Replacement in Numbers

Oh wow, these nerdy projections are scaring the hell out of people Mary Waters. "Why the Announcement of a Looming White Minority Makes Demographers Nervous" 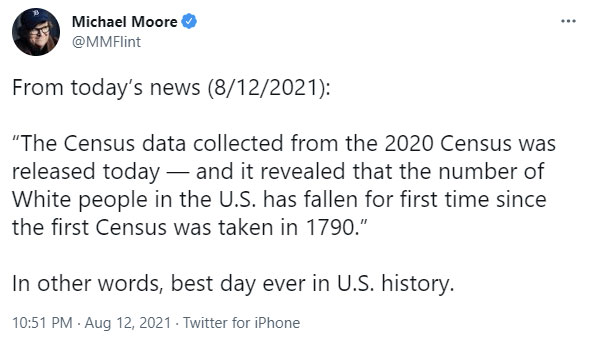 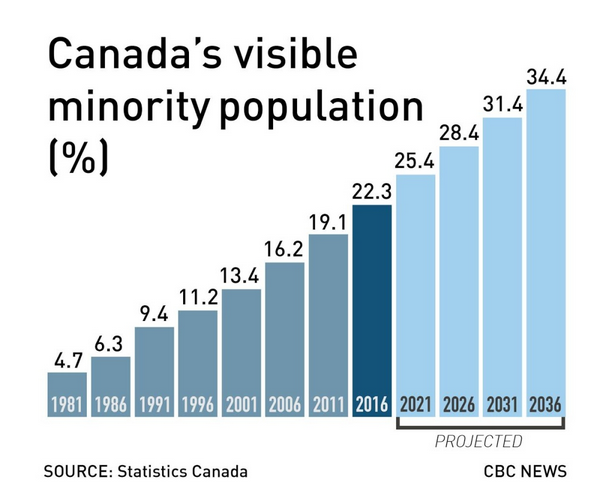 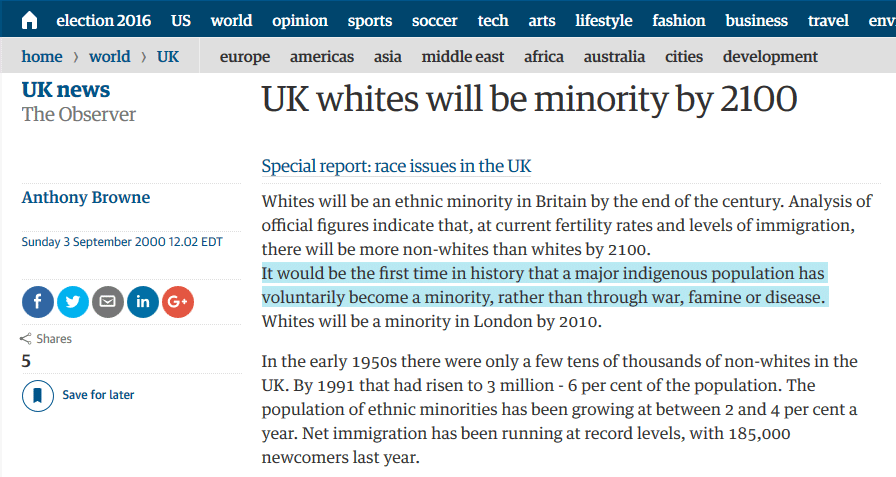 The Great Replacement and Politics

When I was a Revolutionary Marxist, we were all in favour of as much immigration as possible.
It wasn't because we liked immigrants, but because we didn't like Britain. We saw immigrants - from anywhere - as allies against the staid, settled, conservative society that our country still was at the end of the Sixties.
Also, we liked to feel oh, so superior to the bewildered people - usually in the poorest parts of Britain - who found their neighbourhoods suddenly transformed into supposedly 'vibrant communities'.
If they dared to express the mildest objections, we called them bigots.

Peter Hitchens. "How I am partly to blame for Mass Immigration" (April 2013) 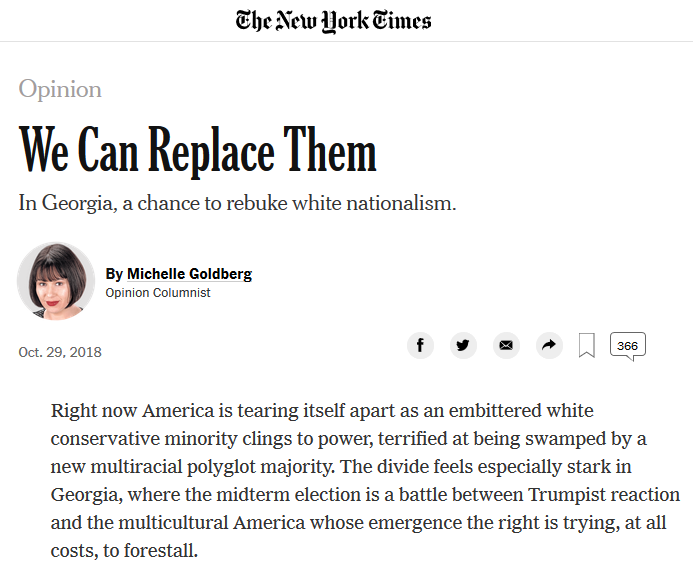 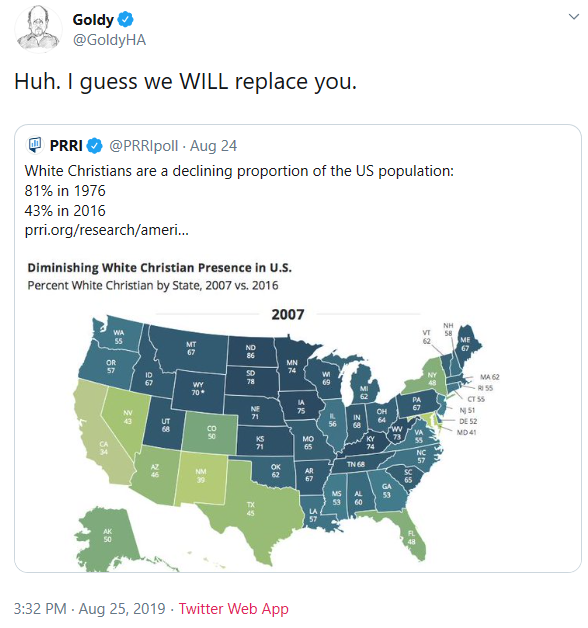 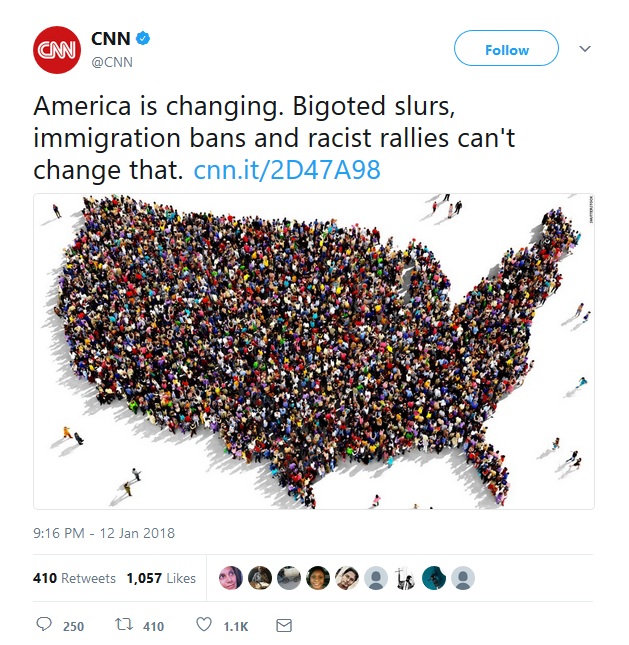 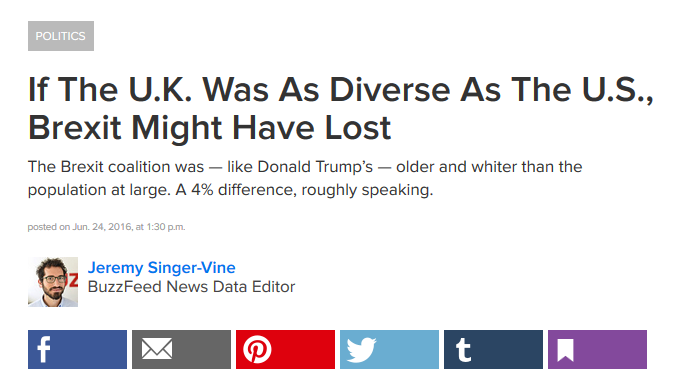 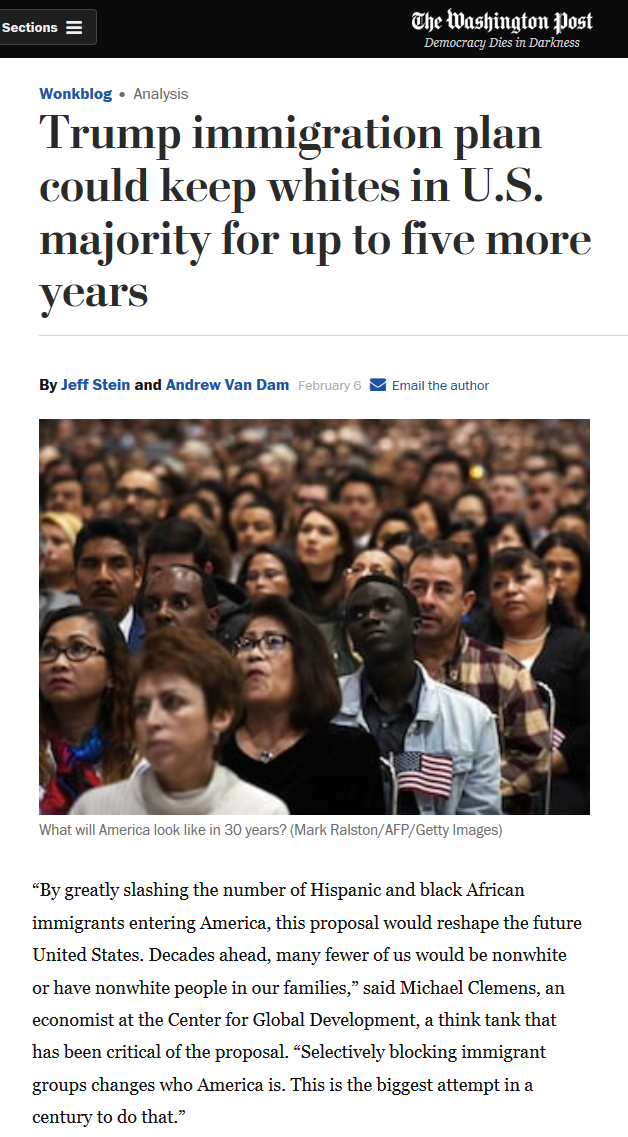 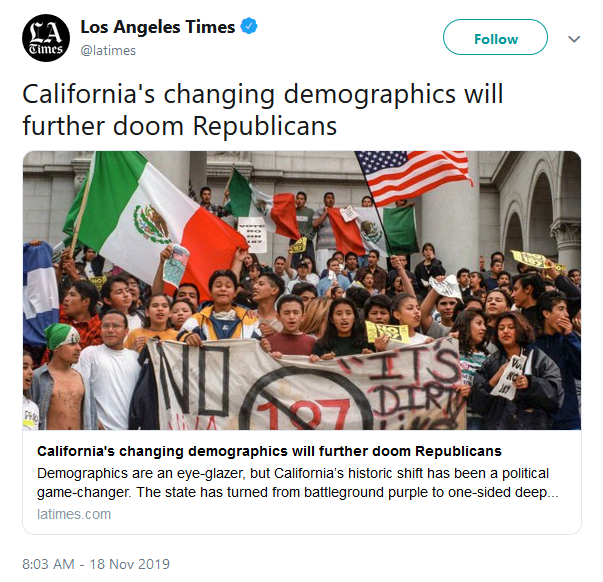 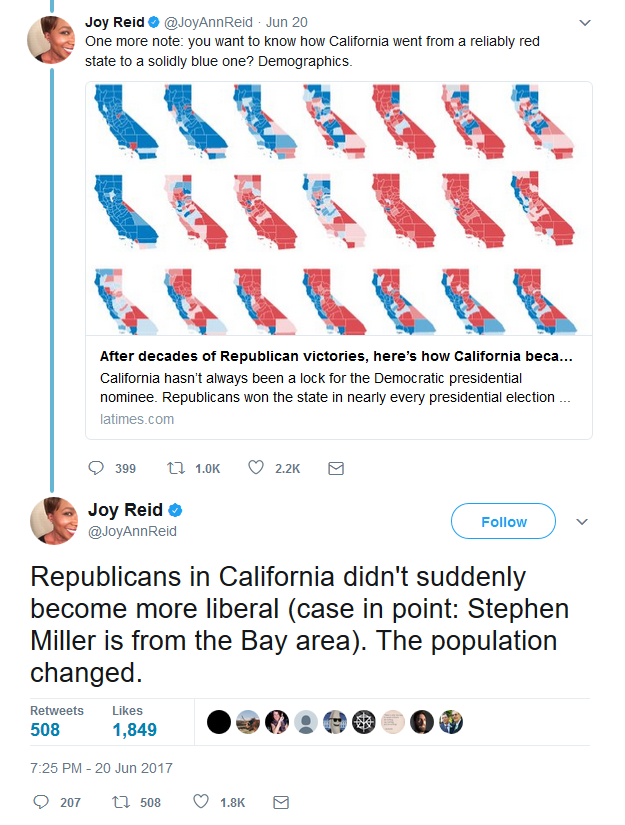 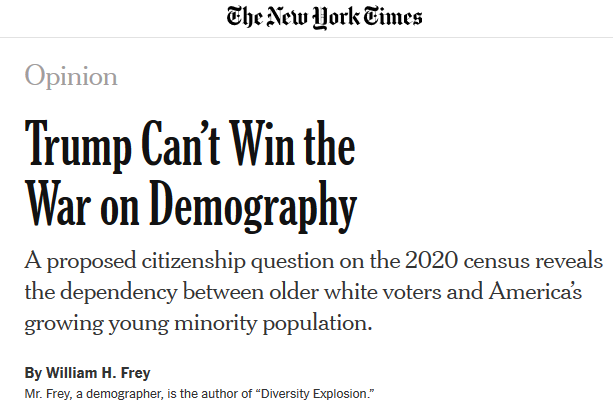 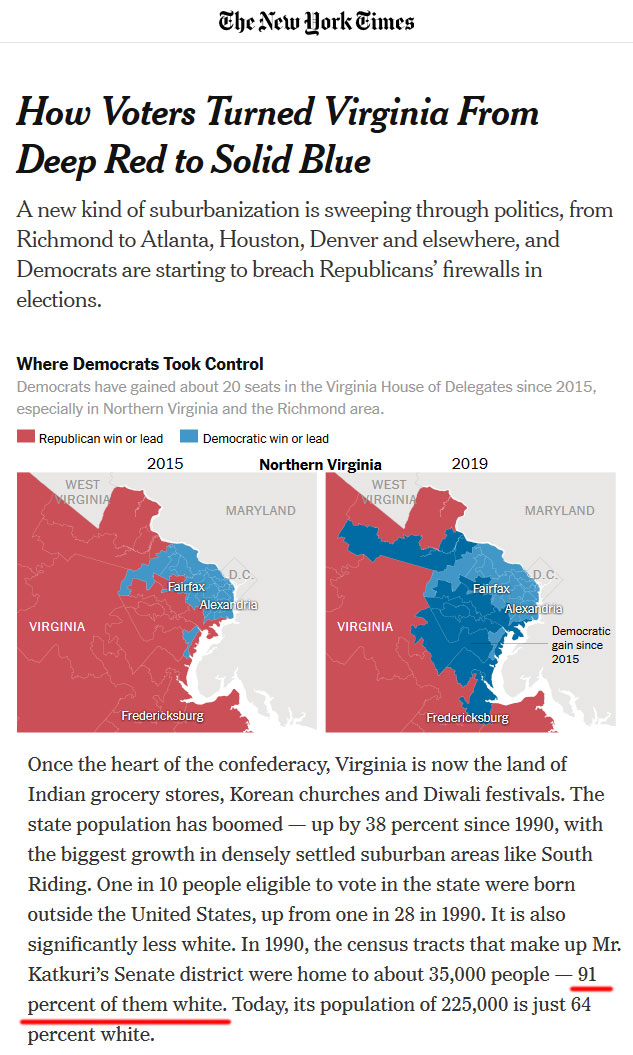 We must understand that what we've been living through is backlash. Backlash. It's not the engine of history. It is the revolt against the engine of history. Then we might remember — just to pat ourselves on the back for a second — that what we are actually endeavoring to do right now is to become a kind of society that has seldom, if ever, existed in history. Which is become a majority-minority, democratic superpower.

We are trying to do something that does not work in theory.

We are living through a revolt against the future. The future will prevail.

Anand Giridharadas. "We are falling on our face because we are jumping high" (January, 2021) 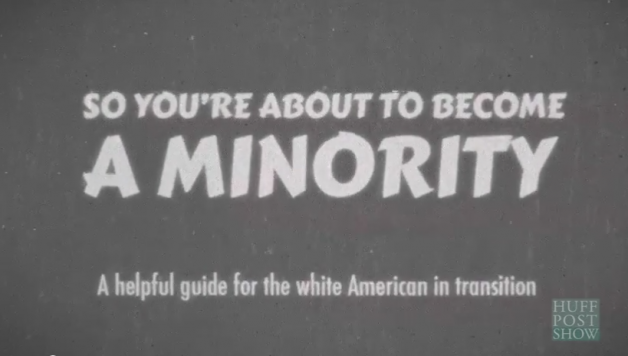 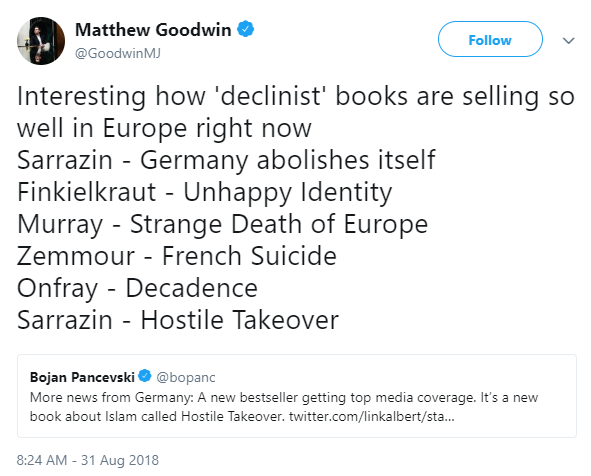 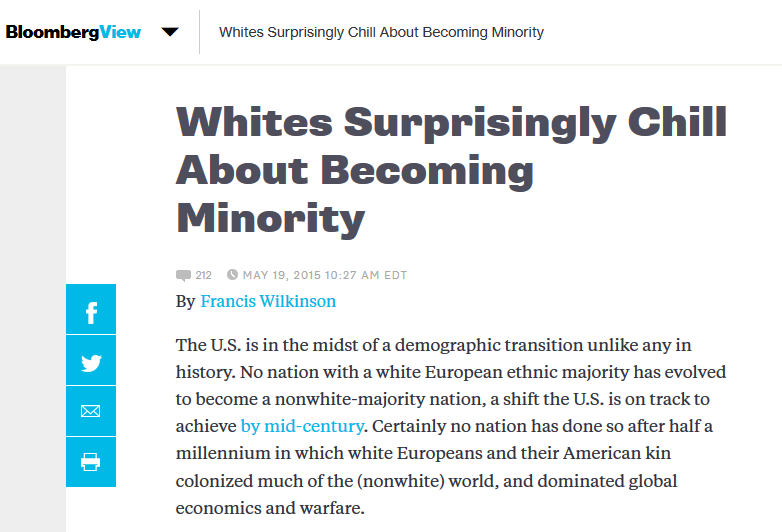 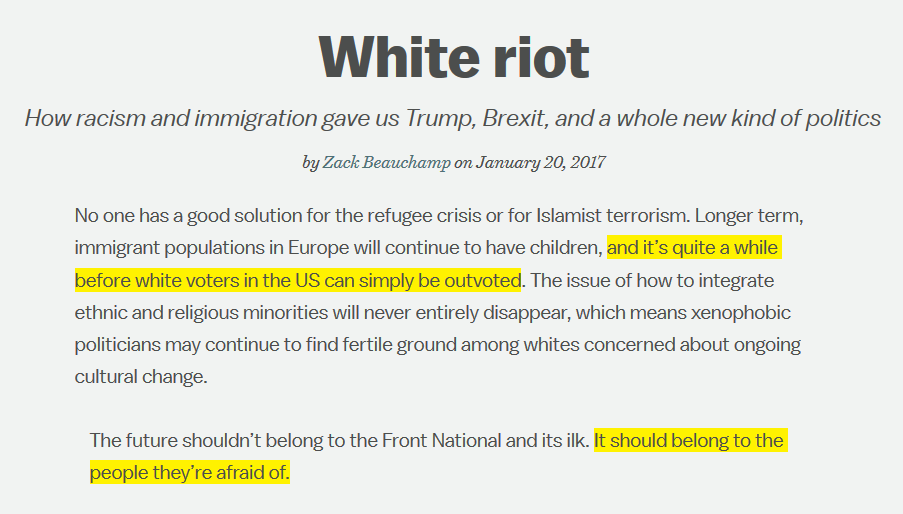 How otherwise shall families continue? How can the commonwealth be preserved if we neither marry nor produce children? Surely you are not expecting some to spring up from the earth to succeed to your goods and to public affairs, as myths describe. It is neither pleasing to Heaven nor creditable that our race should cease and the name of Romans meet extinguishment in us, and the city be given up to foreigners, - Greek or even barbarians. We liberate slaves chiefly for the purpose of making out of them as many citizens as possible; we give our allies a share in the government that our numbers may increase: yet you, Romans of the original stock, including Quintii, Valerii, Iulli, are eager that your families and names at once shall perish with you.

But the curse of every ancient civilization was that its men in the end became unable to fight. Materialism, luxury, safety, even sometimes an almost modern sentimentality, weakened the fiber of each civilized race in turn; each became in the end a nation of pacifists, and then each was trodden under foot by some ruder people that had kept that virile fighting power the lack of which makes all other virtues useless and sometimes even harmful.

Theodore Roosevelt. 26th President of the United States. The Dawn and Sunrise of History (1917)

Civilization's going to pieces ... I've gotten to be a terrible pessimist about things. Have you read "The Rise of the Coloured Empires" by this man Goddard? ... The idea is if we don't look out the white race will be utterly submerged. It's all scientific stuff; it's been proved. It's up to us, who are the dominant race, to watch out or these other races will have control of things.

It appears that if nuclear war does not destroy Western Europe, race suicide will. In 1800, Europe had 20 percent of the world's population. Today it has 9 percent. Unless the increasing demographic imbalance is radically corrected, it will have 4 percent in 2075. ... Bangladesh, a miasma of poverty and ignorance, now produces more babies annually than all Western Europe.

Germans have been dying out for forty years and this has been covered up by counting Turks, East Europeans, and Arabs as Germans. Now, not even immigrants from the Muslim lands, Eastern Europe, and the Third World can mask the reality.

Astonishing. Not long after World War II, West Germany boasted the world's second largest economy. Now a united Germany is on schedule to become a retirement center, nursing home, and cemetery for the Germanic peoples, whose origins date back to before the birth of Christ.

Pat Buchanan. Suicide of a Superpower (2011)

I was in Paris recently, and Paris doesn't look like Paris anymore ... You look at what's going on with some of the major cities and some of major countries, even before this [Syrian refugee crisis], and I'm not hearing that's what they want.

Relevant links related to racial demographics and its implications.